Putting together the pieces... jigsaw

“What a funny bag!” [Michael] said, pinching it with his fingers.
“Carpet,” said Mary Poppins, putting her key in the lock.
“To carry carpets in, you mean?”
“No. Made of.”
“Oh,” said Michael. “I see.” But he didn’t—quite.
By this time the bag was open, and Jane and Michael were more than surprised to find it was completely empty.
“Why,” said Jane, “there’s nothing in it!”
“What do you mean—nothing?” demanded Mary Poppins, drawing herself up and looking as though she had been insulted. “Nothing in it, did you say?”
And with that she took out from the empty bag a starched white apron and tied it round her waist. Next she unpacked a large cake of Sunlight Soap, a toothbrush, a packet of hairpins, a bottle of scent, a small folding armchair and a box of throat lozenges.
Jane and Michael stared.
...
From the carpet-bag she took out seven flannel nightgowns, four cotton ones, a pair of boots, a set of dominoes, two bathing-caps and a postcard album. Last of all came a folding camp-bedstead with blankets and eiderdown complete, and this she set down between John’s cot and Barbara’s.
-- Excerpt from Mary Poppins, by P. L. Travers

There's a steamer trunk in our basement that I swear is a first-cousin to that carpetbag. The repository for wondrous stuff my husband has bought home from yard sales, it regularly belches up jigsaw puzzles.

Turns out Jerry and I make an excellent team. He soldiers on when I give up. 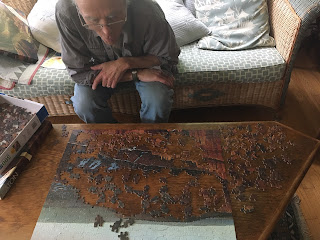 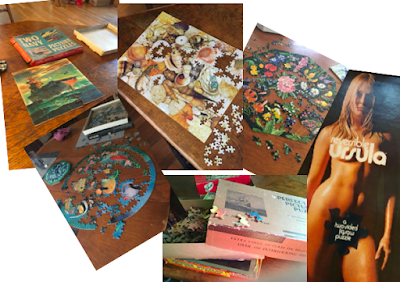 This was the hardest... 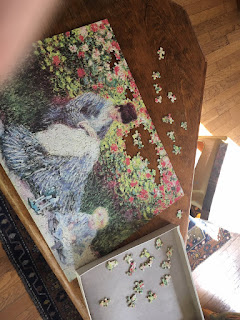 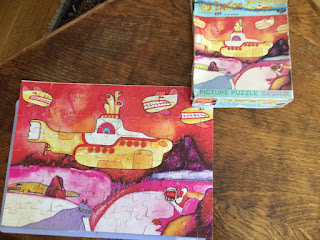 We've only given up on two. So far. One didn't have a picture or description on the box AND a good portion of the pieces had at least one completely flat edge. No fair!

Here's the other one we gave up on. One thousand impossible pieces. 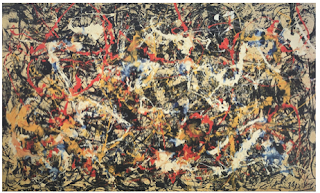 But other than that, jigsaw puzzling has been a smashing success. Just when I'm giving up, Jerry gets a second wind.

Don't tell him, but for his birthday I bought Jerry a 500-piece Springbok puzzle. Birds.

I can't decide whether to give it to him or to hide it in that trunk and wait for him to find.
Back to Feed
Use left/right arrows to navigate the slideshow or swipe left/right if using a mobile device